Effect of Calcination Temperature and Fuel to Oxidant Ratio for Synthesis of Li Ni0.5Mn0.3Co0.2 Cathode Powder for Li-ion Battery Via Solution Combustion Method

Single phase LiNi0.5Mn0.3Co0.2O2 compound were prepared via acid citric-nitrate combustion method. The effect of F/O= (0.5, 0.75,1 and 1.5) and calcination temperature (700, 800, 850 and 900℃ ) on the structural and electrochemical properties were investigated. The structural evolution was assessed by thermo gravimetric analysis/simultaneous differential thermal analysis (DTA), X-ray diffraction (XRD), inductively coupled plasma optical emission spectrometry (ICP-OES) and field emission scanning electron microscopy (FESEM) experiments. The electrochemical performance was evaluated by analyzing the charge/discharge profiles and cycling stability. The results show that the best electrochemical performance with 159 mAh/g discharge capacity in 0.1 mA/cm2 current density and 95% cycling stability after 20 cycles for sample of calcination temperature of 850℃ and F/O=1. The improved electrochemical behavior is closely connected to the reduction of the cation mixing after metal substitution and reduction of ion diffusion path for Nano particles size.In the present study, micro-arc oxidation (MAO) was first applied under the voltages of 300, 330 and 360V for 5 min to form a porous calcium-phosphate containing titanium oxide layer on CP-Ti. Subsequently, 45S5 Bioglass (BG) film was deposited on the MAO layer by electrophoretic deposition (EPD) technique. The phase, structural agents, microstructure and composition of MAO interlayer and BG film were characterized by X-ray diffraction, Fourier transform infrared spectroscopy, scanning electron microscopy and energy-dispersive X-ray spectroscopy, respectively. Thermal behavior of the as-deposited BG coating was analyzed by simultaneous differential scanning calorimetry and thermal gravimetery. The microstructure of oxidized samples showed that the micro-porous TiO2 surface layer was widely covered with interconnected HA clusters with Ca/P ratio similar to human bone after MAO treatment under 360 V. The results of potentiodynamic polarization measurements in simulated body fluid solution and micro-scratch tests depicted that the combination of MAO treatment at 360 V and EPD of BG on CP-Ti could effectively increase the corrosion resistance as well as the bonding strength between coating and substrate.The severely deformed 1050-aluminum sheet was processed by friction stir processing (FSP) at different conditions of processing without nanoparticles in the ambient temperature and with SiC nanoparticles in the liquid Nitrogen medium. Microstructural assessments indicated that the appropriate distribution of SiC nanoparticles was obtained after 3-passes of FSP. In addition, electron backscattered diffraction (EBSD) analysis manifested that using nanoparticles along with the liquid Nitrogen medium during FSP was able to prevent the intense grain growth in the stir zone which occurred in the case of FSP without nanoparticles in the ambient temperature. Neither the orientation of grains nor the mechanism of grain formation in the stir zone was different comparing two mentioned FSP conditions. The mechanism of grain formation in the stir zone was determined to be dynamic recovery (DRV) and continuous dynamic recrystallization (CDRX) phenomena. However, discontinuous dynamic recrystallization (DDRX) mechanism was also evident in the limited extent in the case of FSP with SiC nanoparticles in the liquid Nitrogen medium. The microhardness results showed that the simultaneous use of SiC nanoparticles and liquid Nitrogen medium during FSP caused to the significant improvement in the mechanical properties of the stir zone.Strain Induced Melt Activation (SIMA) process, is a semi-solid process to create globular grains in alloys. In this process, after applying a desired strain, the sample is heated up to semi-solid region and is hold for a desired time. In the present study, SIMA process was applied to form globular microstructure in 7075-Al alloy. The effects of strain value, strain temperature, semi-solid holding time and semi-solid holding temperature on the average grain size and shape factor were investigated. Optical and scanning electron microscopes were used to investigate the microstructure. The results revealed that, it is not possible to introduce a distinguished mechanism for generating the globular grains; while depending on the liquid fraction and strain value, there is a competition between recrystallization and internal melting of grains. Also, the results depicted that, in the SIMA process, the elongation would be increased with respect to T6 condition; while there is no considerable reducing in the strength.In this research, We reported a novel and facile approach to fabricate rGO nanosheet arrays on 3D porous nickel foam. A graphene layer with the sharp edges and wrinkles was obtained on nickel foam by an electrophoretic deposition (EPD).The fabricated electrodes were characterized using scanning electron microscope(FE-SEM).The GO sheets on the nickel foam was annealed at 300 ̊C, 600 ̊C and 900 ̊C for 4 h under flow of Ar. The electrochemical activities of supercapacitors were assessed using cyclic voltammetry (CV) and charge-discharge measurements. A maximum specific capacitance of the Go annealed at 900 ̊C can reach up to 148Fg-1 at a scan rate of 5mVs-1, which is higher than Go annealed at 600 ̊C (115Fg-1), Go annealed at 300 ̊C (72Fg-1) and Go (52Fg-1). The supercapacitor based on a GO with 900 ͦC of annealing temperature showed long cycling stability with 96.1% of capacitance retention after 200 cycles. 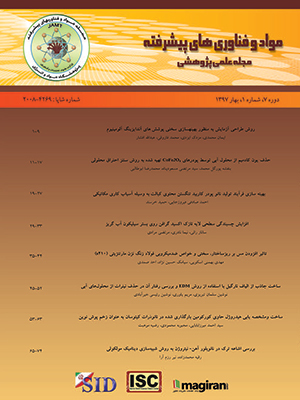